Founded by Nawaz Pasha & based out of Bengaluru, Adarsha Community Development Service Centre primarily focuses on empowerment of the visually impaired through a multi-pronged approach at the youth level, across rural and urban areas. Adarsha works on a wide canvas.

Its activities range from

Sri.Nawaz Pasha was born in a poor family living in a small village. He was born blind and at the age of 10 he was physically affected by polio. Notwithstanding the vagaries of fate, he started working towards development of local communities especially for disabled people. Soon he completed a Community Based Rehabilitation (CBR) program with the CBR South Asia network and thereafter worked with various organizations in this field. He founded Adarsha CDS Trust to help people with disabilities especially in rural and remote areas. He wants to raise awareness and sensitize people about the rights of disabled people. Furthermore, he also hopes to provide access to educational and vocational skills to the disabledso that they could live their life with dignity.

Smt. Husain Banu was born in Kavithal village in Raichur district. At a young age she developed jaundice and thereafter due to the lack of health care, she lost sight in both her eyes. She however persevered and graduated fromKavithalGovtcollege, and then also completed a special education course. She continued to pursue her desire to become a music teacher and is currently working as a music teacher at a government school. Her past difficulties and struggles are a large motivator for her to give back to her local community. An energetic and caring social worker, she hopes to one day unite the blind community with the main stream society.

Sri.ShivanappaHakki has committed much of his career to helping those in need. He has worked in many areasand has spent a lot of time on the ground for socially impactful work, the majority of the NGOs that he has worked with being from Bangalore. He had worked with disabled too, so it was a smooth transition to work with the visually impaired as well. A graduate in arts from Dharwar District, he has been with Adarsha CDS Trust from inception. 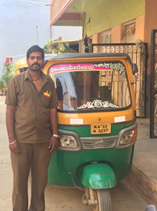 Sri.ShivakumarSwamy has been with Adarsha CDS trust since its inception. Shivakumar lives a modest life and in his free time gives what he can back to the community. His previous experience in working with NGO’s was numerous jobs relating to social work.

Commander Lijo Chacko (retd) was in the submarine cadre of the Indian Navy. He has operated submarines and also headed the submarine division in the Naval Dockyard, Mumbai. In his last role in the Navy, Lijo was the Project Coordinator of the simultaneous construction of Scorpene Submarines at the Mazagon Dock Ltd. Lijo actively engages with several social organisations/movements and is the Head of CSR of Synergy Marine Group. He is also a Fellow at the Institution of Engineers.

Adarsha CDC Trust has two Key Initiatives for above activities :

You can make a Difference